East of the Rockies there is a stretch of Albertan forest familiar to tree-planters. After a brutal day of planting white spruce and pine in an overgrown, thorn riddled, wasp infested, three-year-old fly block somewhere between the swamps of Swan Hills and the sweet canola fields of High Prairie, we were waiting there impatiently for the helicopter to come.

The skies began to fill with dark, purple clouds. The wind was violent; we could hear branches snapping in the treeline. The thunder was chaotic; we could see lightening in the distance. The rain began to fall; we spotted the helicopter flying towards us. The pilot couldn't maneuver the wind to make the designated landing site, so he put the chopper down on the other side of the cut-block. We didn't have much time. Time is always on a tree-planter's mind. If we didn't make the chopper we'd have to wait out the storm on the open block. Or worse, if the sun went down before the storm let up we'd have to stay in the forest overnight with nothing but our rain gear, wet cigarettes and empty lunch bags. We ran to make time.

We ran down the muddy trail, over fallen logs, through wispy grass and into a shallow ravine towards the chopper. I didn't feel scared. I don't think anyone did. It was tree-planting business as usual. Thunder. Lightening. Rain. Hail. Snow. Wind. Bears. Bugs. Thorns. Nettle. Waiting. Hurrying. Hiking. Sweating. Shivering. Flying. Falling. Jumping. Tripping. Bleeding. Mending. Giving up and getting up to plant again the next day.

I heard a thunderous crack that didn't belong to the sky and my supervisor hollered, “TREE!!”. I looked up from the edge of the ravine and saw the thick, sixty-foot widow-maker falling perfectly towards us. Then I felt scared.

I couldn't go left. I couldn't go right. I couldn't go forward. I only had time to throw myself backwards and brace for impact. The widow-maker slapped the ground and sent woody debris flying into the air. The last thing I saw was my friend dive into the mud and disappear beneath the trunk... 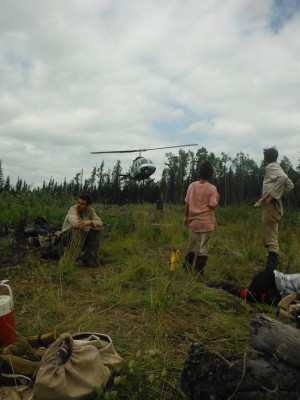 The Dogon, a Malian ethnic group, have an interesting relationship with trees. They believe the forest is alive and in flux, while villages are stagnate and fixed. Rocks move. Trees move. Animals know human intention. The forest is home to spirits and these spirits can attack. It is a force that gives and takes. Trees give life, but can also bring death.  They prefer to trim branches than to fell whole trees. Wood is used thoughtfully and hardly ever wasted. The Dogon believe the forest replenishes itself, so they exert very little control over it and plant very few trees. Their conception of the forest is directly related to how they treat it and is in direct opposition to how I conceived of it before that sixty-foot widow-maker knocked some sense into me. (Milton, 1996)

I can assure you that when a tree falls on you in the forest, it makes a sound. It seems louder than thunder. It seems faster than lightening. Its presence seems so abundant that its escape from your attention seems impossible. How then, could a gigantic falling tree have remained invisible to me until I had placed myself in its trajectory?

I opened my eyes. I was covered with leaves and twigs. The largest branches had just missed me, but my friend was still buried beneath the tree.

“Where is he?!”, someone yelled. I didn't know. I began to panic. Then some branches moved and he pulled himself out from under the trunk.

He stood up, patted down his body and yelled, “I think I'm okay!”  Except for a busted ankle, he was.

We pulled ourselves together and made the chopper. The pilot maneuvered the storm with finesse, fought the turbulence and returned us to camp safely. I didn't feel safe though. I felt lucky.

The only reason I can write about that widow-maker as a cautionary tale of tree-planting misadventures is because time lined up perfectly, so that a potential disaster turned out to be a near miss instead. What if I had jumped forward? What if the trunk had lined up a few degrees differently to my friends body? What if my supervisor hadn't yelled out? What if we had just paid more attention?

It's interesting to think about how a tree-planter's perception of the forest influences their safety. Many of us, in our familiarity with the cut-block and its hazards, may forgot to respect the power of this environment. I failed to assess my surroundings thoroughly that day and found myself rushing towards a falling snag. I was focused on making the chopper and became inattentive. If you've been planting for awhile you're skin is probably thick and the forest may even feel like a second home. Scaring away bears, working in a volatile environment and braving a bush camp for months changes a person’s understanding of discomfort and danger. When the forest is your second home and when you feel like you have control over your work environment, it becomes easy to undermine hazards on the cut-block. This season I'll be thinking about the forest a little differently. I'll be thinking about how some people perceive the forest as all powerful and relate to it more cautiously. I'll be keeping my eyes open for snags and thinking about how lucky we were to have escaped that widow-maker.

Stephanie page has been planting trees for five years and currently works for Next Generation Reforestation in Western Canada. In the off-season she lives in Montreal and studies at McGill University and can be reached at [email protected].