An introduced fungal pathogen (Cronartium ribicola) known as white pine blister rust is decimating whitebark pine throughout most of its range.  This canker disease has a complex lifecycle, but in general, the younger or smaller a tree is, the quicker it dies.  Larger trees may survive for decades, however stem cankers will often kill crown tops.  This is where most of the valuable cone-producing branches are.  Whitebark pine grows so slowly, trees often need to reach ages of 50 to 80 before they produce cones.

In southeast British Columbia and southwest Alberta, most whitebark pine are dead or dying from blister rust.  The mountain pine beetle (Dendroctonus ponderosae) epidemic has accelerated the decline, causing great concern since the beetle prefers mature trees which produce the most cones.  Many whitebark pine populations are further stressed by increasingly crowded stand conditions.  This is a reflection of mandated fire exclusion.  By eliminating natural fires, less fire-hardy competitors such as Engelmann spruce (Picea engelmannii) and subalpine fir (Abies lasiocarpa) have prospered to the detriment of whitebark pine, which is not a strong competitor. 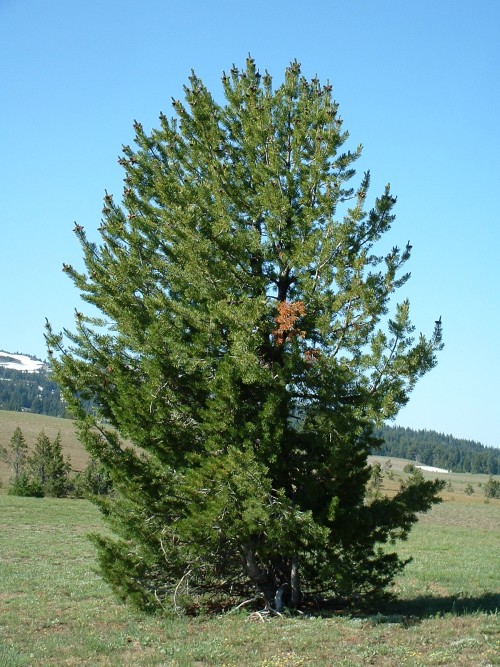 Recognizing the mounting pressures on whitebark pine and dependent wildlife, the Canadian government classified it as endangered in June 2012.  It is the first tree in the West to receive this declaration.  As of this writing, restoration planning is in the earliest stages and there are no range-wide government restrictions on whitebark pine harvest or use.  However, some forest licensees have already incorporated tree retention guidelines in their formal plans (e.g. Spray Lakes Sawmill, AB and Canfor’s operations near Cranbrook, BC).  While the government of Alberta is nearing completion of its own recovery plan for crown lands, individual forest plans (e.g. C5 and R11) have articulated whitebark pine retention guidelines.  The BC Forest Service has issued an informal bulletin providing general information and recommendations for avoiding harvest (www.whitebarkpine.ca/publications.html).

Forest professionals can provide clear, measurable and verifiable direction and silvicultural support for whitebark pine through Forest Stewardship Plans (FSPs) and landscape level planning.  Species at risk, including whitebark pine, may be addressed through stand-level biodiversity measures and wildlife as FRPA (Forest and Range Practices Act) values in an FSP, where high-value individuals may be identified for reserve selection and cone collection.  Stocking standards can incorporate whitebark pine as a preferred or acceptable species if accompanied by a professional rationale in support of objectives for wildlife or biodiversity.  Whitebark pine stands, especially those with many cone-bearing trees and in good health, are good candidates for wildlife tree reserves, Old Growth Management Areas, and Wildlife Habitat Areas for grizzly bears.

In areas planned for harvest, it is now important to prioritize conserving and identifying trees which appear to lack blister rust cankers.  These trees may be rare disease-resistant genotypes, thus providing a life-link to the species’ future in the area since resistance to blister rust can be passed down from the parent trees to their seedlings.  Currently, every state and province that administers whitebark pine is identifying, testing, and propagating disease-resistant progeny capable of surviving blister rust.  Thinning can benefit whitebark pine by targeting and removing competing tree species.  Opening up canopies often improves reproduction of whitebark pine by attracting seed-caching Clark’s nutcrackers and providing better light conditions for pine seedling growth.  These seed caches are the primary way that whitebark pine regenerates since.  As an example, in the East Kootenay Region, BC Timber Sales (BCTS) has adapted the following guidelines.

Post-harvest activities such as burning and thinning can also be designed to avoid damage to whitebark pine.  By implementing the above-mentioned options, forest professionals fulfill an important role in sustaining this remarkable tree.

Michael P. Murray, Ph.D. is a Regional Forest Pathologist, BC Forest Service, Nelson, BC.  He is currently screening whitebark pine for disease resistance, examining root disease with tree ring methods, and investigating paper birch decline.  He serves on the Board of the Whitebark Pine Ecosystem Foundation (www.whitebarkfound.org and www.whitebarkpine.ca).  Michael can be reached at [email protected]

After working as a research scientist and consultant for 15 years around the Pacific Northwest, Jodie is currently working in the operational side at the Ministry of Forests, Lands, and Natural Resource Operations in Squamish.  She has been studying and conserving whitebark pine since 1999.  Email: [email protected]