As the MPB moves increasingly northward toward Yukon, the Forest Management branch continues to assess the risk of infestation and take proactive measures to stay on top of the very real MPB threat. Learn about what actions have been taken so far and what forest health results are coming in from the field. 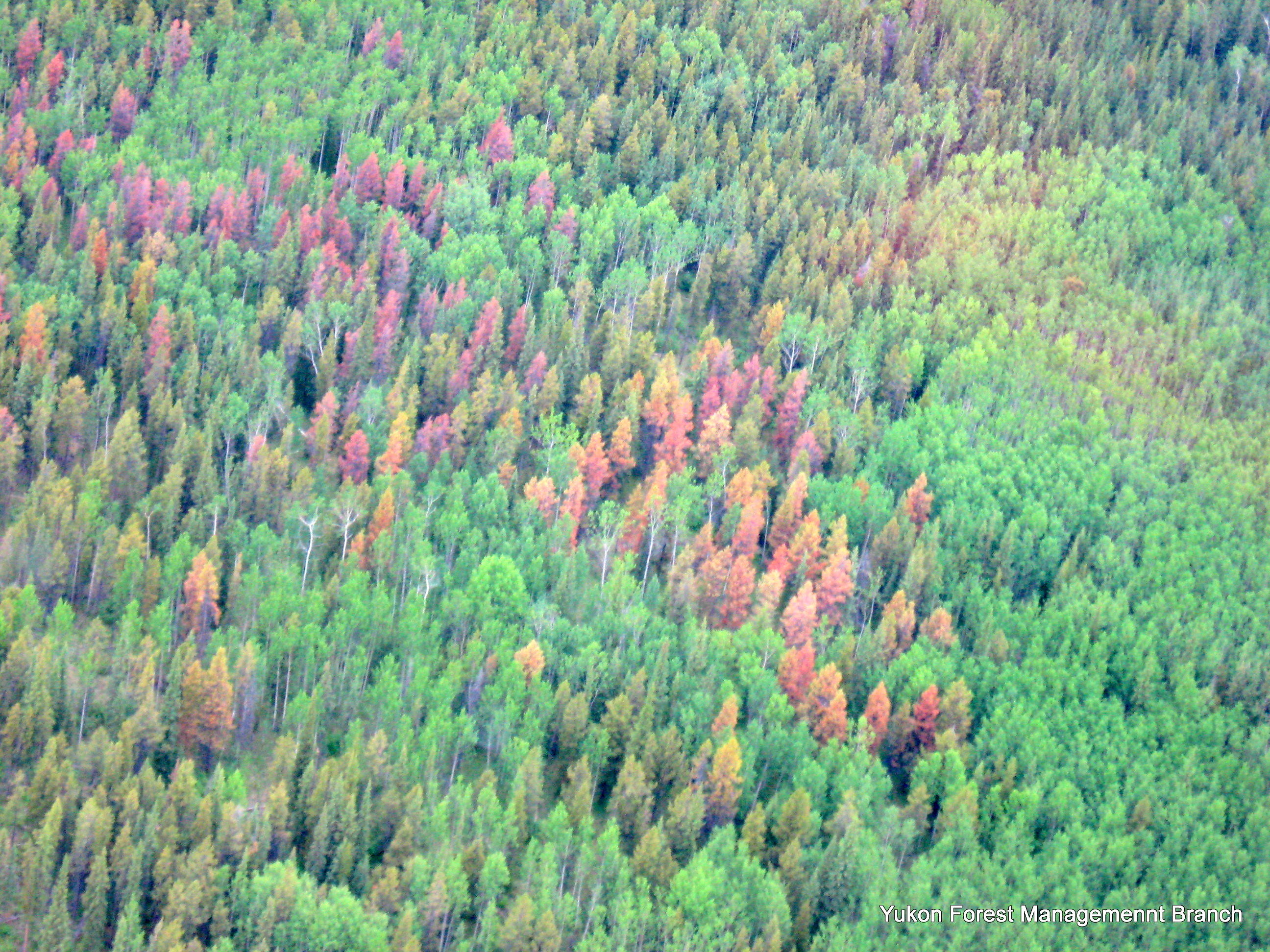 The mountain pine beetle (MPB), Dendroctonus ponderosae, is a native North American bark beetle that is distributed throughout most of the range of lodgepole pine in British Columbia. Although the MPB population has not expanded into Yukon (there are currently no confirmed sightings of the beetle in Yukon), it has moved quickly northward in the last few years within the Rocky Mountain Trench in northern British Columbia.

In the next few years, there is potential for further northward movement of MPB into Yukon.  For this reason, Yukon government’s Forest Management branch has been monitoring MPB in northern BC by aerial and field surveys since 2009.

In 2011 the Government of Yukon established an interdepartmental MPB committee to assess the risk of MPB to Yukon pine forests.  Other responsibilities in the committee’s mandate include identifying information and research gaps and management options should the MPB establish in Yukon.  One of the recommendations resulting from the committee’s work was to complete a pest risk analysis as a response to the potential threat of MPB to novel lodgepole pine forests and to continue monitoring the northward movement of MPB in northern British Columbia.

Risk to Yukon’s forests and Monitoring the MPB

A pest risk analysis was completed in December 2012 by a forest health specialist contracted by the Forest Management branch.  The first step in developing the pest risk assessment was the identification of risk posed by a specific disturbance agent (MPB).  In the case of MPB, the potential risk to Yukon forests was recognized as early as 2003, when pheromone baits trapped beetles for the first time on the east side of the Rocky Mountains near Chetwynd, B.C. Then the Rocky Mountain Trench was recognized as the most direct and geographically the most suitable lowland route for the beetle to move northward toward Yukon. Forest inventory data also indicated an abundance of susceptible pine within the Rocky Mountain Trench.

The only question remaining was whether the beetle could survive the rigours of climate, particularly the increasingly harsh winters, as it moved northward. This question was answered by aerial survey data from British Columbia, which documented the northward movement. In 2010, large areas of continuous beetle-caused mortality were mapped within the Muskwa-Kechika Conservation Area, 150 kilometres south of the Yukon border.

In 2011, after viewing the 2010 aerial survey maps from northern British Columbia, Forest Management branch staff took a proactive approach to managing the threat posed by the MPB. Surveys were conducted to determine beetle movement between 2010 and 2011, as well as an assessment of the size and health of the current MPB population. Aerial surveys in 2011 determined that the beetle had advanced northward and killed small numbers of pine trees as close as 80 kilometres south of the Yukon border. Ground surveys within 13 stands in August 2011 found that severe cold during the winter of 2010/11 had killed the vast majority of broods within the trees but significant recent attacks were seen in three of the 13 stands. Detailed results of these surveys were published in two reports available upon request from the Forest Management branch.

The Forest Management branch will continue to provide updates on the monitoring of the northward movement of the MPB to land managers and the public in Yukon through public reports (such as the yearly Forest Health report), presentations and other information gathering sessions.

Two MPB assessments were conducted in 2012 and were broken into two stages:

In early June 2012, a four-person crew accessed nine stands by helicopter to perform “R-value” assessments on trees that were attacked the previous year. The purpose was to determine survival of overwintering broods and estimate the risk for further attacks by emerging broods.

The first three assessments were made at sites where current attacks were found and trees were flagged during the 2011 ground survey. The additional six sites were selected for assessment based upon the presence of “faders” (trees attacked and killed in 2011 and recognized from the air by the yellow-red colour of the crowns), and the availability of a helicopter landing site. 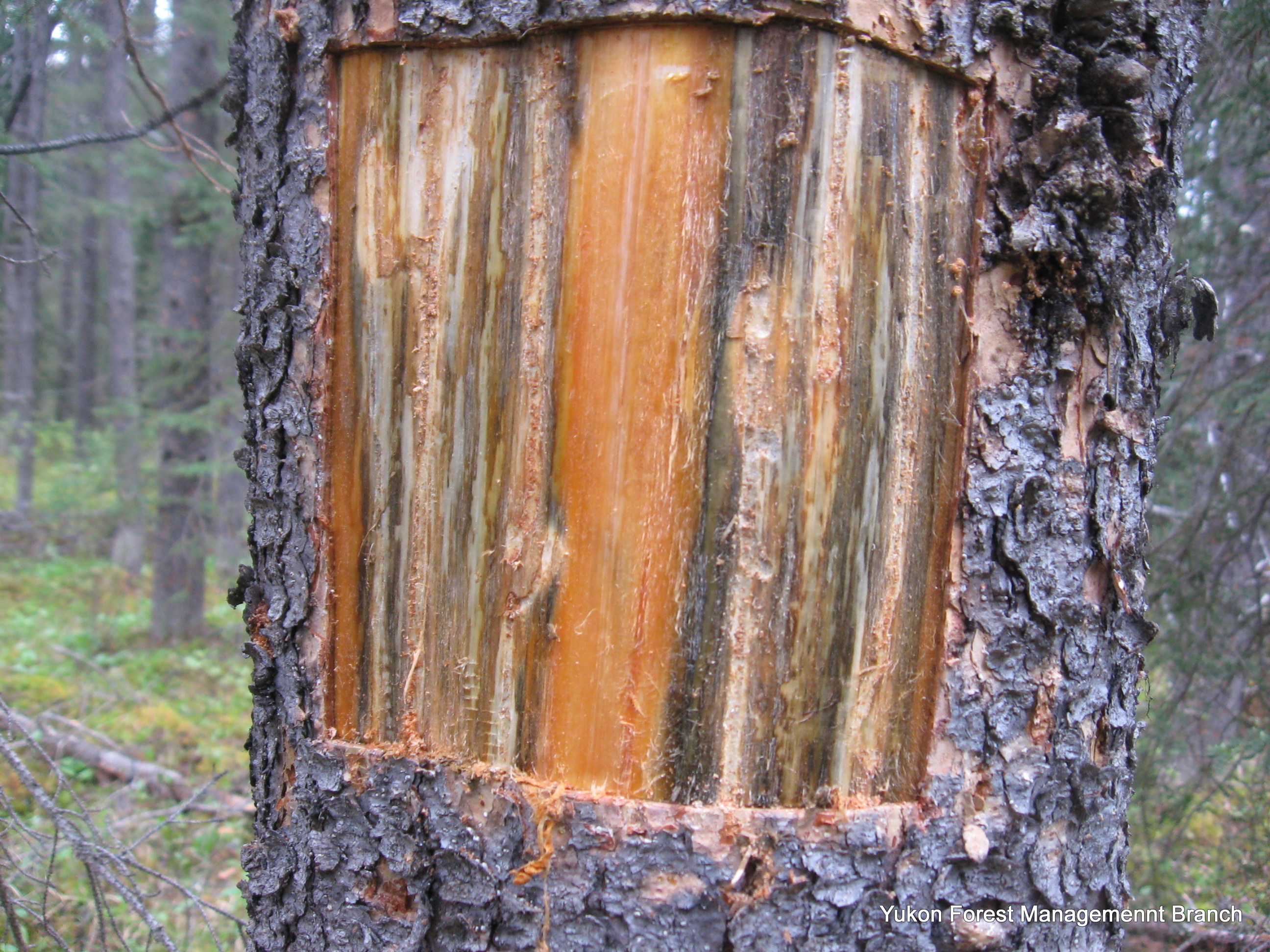 The assessment consisted of removing 225cm2 (15 cm X 15 cm) bark samples at breast height (1.3 m) from the north and south sides of each of 10 trees per site and counting the surviving broods. No living progeny were found in any of the 172 samples (Photo 2). Note only six trees were sampled at one site. Heavy woodpecker debarking was seen at all sites.  Little or no larval development was seen in most samples.

Any development that was seen had been killed by winter cold. There were signs of woodpecker feeding at most sites, but instead of removing extensive bark in search of larvae, the woodpeckers had made small and evidently targeted feeding holes. We concluded that, in most cases, the woodpeckers had been feeding on the parent adults. 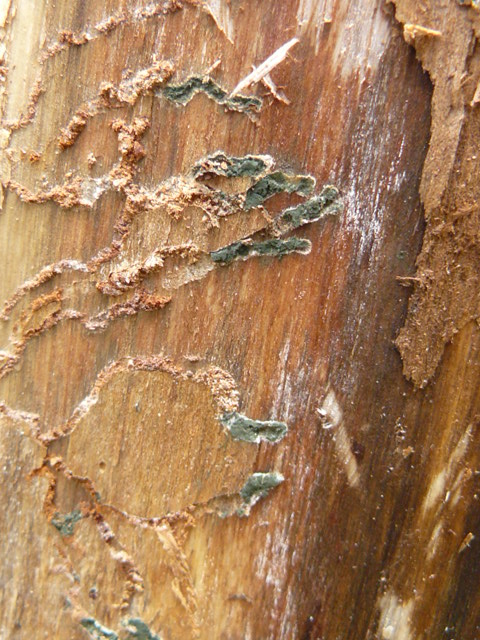 In most cases of severe winter mortality, it was possible to find a small surviving population at or near the root collars of the trees, where the broods were insulated from the severe cold by a layer of snow. Examples of survival were found at some of the sites but time constraints precluded a comprehensive examination to determine frequency and abundance. These progeny will have matured into adults later in the summer, and emerged from the trees to attack new hosts. In addition, examination of a few of the red trees (attacked in 2010) found small numbers of preflight adults that had failed to mature in 2011. These beetles will have emerged within the next few weeks, but the population was small and unlikely to overcome normal tree defenses. 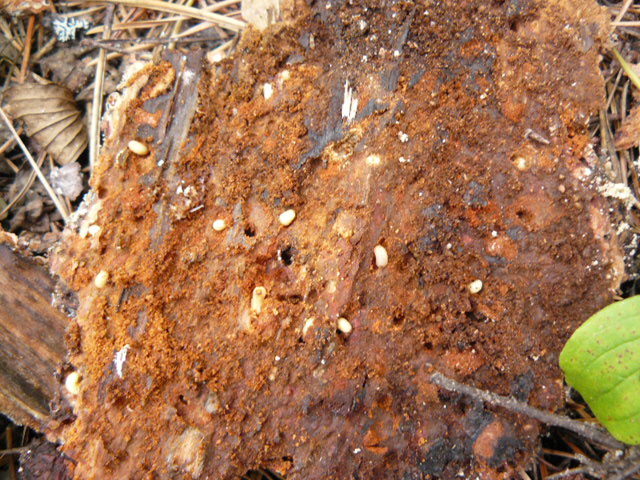 A two-day fixed-wing aerial survey was completed in July 2012 to map “faders.” In 2011, south of the confluence of the Kechika and Frog rivers (approximately 150 km south of the Yukon border) MPB had killed almost all of the mature pine. North of there for another 10 km, many large patches of mortality were mapped, but there remained an abundance of available host. All areas mapped in 2011 within this zone contained faders, but in 2012 the attack intensities were generally lower.  Farther north within the trench, patches of attacked trees were small and widely scattered and there was no increase in mortality from that recorded in 2011.

A small patch containing a few “faders” was mapped near Aeroplane Lake, approximately 80 kilometres south of the Yukon border. There was, however a significant northern movement to the east of the Rocky Mountain trench. Populations had apparently crossed the height of land between this creek and Matulka Creek to the south, where some mortality had been recorded the previous year.

Since 2009, FMB has been setting up and monitoring pheromone bait tree stations in southern Yukon to detect MPB. These pheromone baits do not attract MPB over long distances, but will draw them to the baits if they are already in the area. No presence of MPB was found in 2012.

It is not known at this time if there will be a sufficient MPB population to attack and overcome the defenses of a significant number of trees and continue the infestation into 2013. It is clear, however, that the northern movement of MPB faces significant challenges in the Rocky Mountain Trench. Two successive winters with prolonged periods of intense cold have killed all of the broods above the root collar. The number of “faders,” though surprisingly high, was significantly less than was seen in 2011. This decline in tree mortality is expected to continue in 2013. If favorable weather occurs for a few years in a row (i.e., mild winters and seasonably warm spring and summers), populations could increase. The MPB is well adapted to take advantage of opportunities, and there remains a large pool of susceptible host trees. A possible future scenario could result in small remnant populations surviving and crossing the border into southeast Yukon and killing scattered individual or small groups of trees. This could occur within the next five to eight years. Meanwhile, Forest Management branch will continue the pheromone trapping program targeting pine stands along the Alaska Highway southeast of Watson Lake, to monitor any beetle populations that stray across the border.