Forests – and their soils – are twice as important as carbon sinks

Soil science may soon double the size of forest carbon sinks that foresters can manage.

Conventional science has it that intensive forest management practices like clearcutting have a negligible impact on mineral soil carbon storage. As a result, forest carbon modelers, researchers and policy makers assume that it is only the carbon stored above the ground and in roots that we can change with management. Forest carbon offset standards omit monitoring of non-root soil C pools through the lifetime of verified offset projects, assuming that no significant changes will result from management.

The assumption that soil carbon stocks  are stable has led to the conclusion that the only way to utilize forests as carbon sinks is through increasing carbon in aboveground biomass and increasing carbon stored in durable forest products.  Likewise, substitution effects of subbing out carbon intensive fuels and materials for wood-based fuels and construction materials have been proposed as a viable way to leverage forests to slow the increase of atmospheric carbon dioxide.

Reducing forest carbon management to two basic pools – biomass and forest products - has led to a debate about how to best manage forests to achieve long term removals of carbon from the atmosphere.

Conservationists have proposed straight-up protection of forests from any cutting to maximise carbon stored in biomass as the best way to fight climate change.

Industrialists have proposed that maximum utilisation of biomass in the form of forest products that replace or substitute more carbon intensive materials and fuels are the best way to keep carbon out of the atmosphere.

This false dichotomy – 100% protection vs. 100% utilisation – has polarised the debate over how best to manage forests to fight climate change, and has not served us well.

A recently published paper by a team of researchers from Dartmouth College, the University of Vermont, Lund University in Sweden and the Vermont Department of Forests, Parks and Recreation could lead to a viable middle-path.

Published in Global Change Biology Bioenergy and titled ‘Mineral soil carbon fluxes in forests and implications for carbon balance assessments’, this paper calls into question the commonly accepted science that clearcutting does not significantly impact soil carbon. They do this by bringing together evidence from recent field studies which indicate that clearcutting mobilises – for whatever reason – a significant portion of the carbon in soils.

If clearcutting causes a medium term loss of carbon – and studies suggest that it can take up to 80 years to recover the carbon lost – then intensive management practices that utilise clearcutting could be releasing more carbon into the atmosphere than is being stored in forest products.

And because there is so much carbon stored in soils – estimated to be up to 2 times as much in the top meter of soil as exists in all other aboveground carbon pools – even a relatively small loss of carbon from soils can offset and reverse any gains in carbon storage from forest products and substitution effects.

The authors propose ways for scientists, foresters and policy makers to further investigate these soil C dynamics and begin to incorporate them into our models, management and policy. Those wishing to  claim societal carbon sequestration and storage benefits through intensive forest management, for example, must shoulder the burden of proof to show that their management practices are not causing a net carbon loss from forest soils.

This presents a huge opportunity to those charged with managing forests, particularly in temperate regions where fires are not a significant natural disturbance.

In the Acadian Forest region, it’s not uncommon to find forest sites that have been heavily cut three or four times in the last two centuries, and now rotations are getting shorter.  If this pattern of harvesting has reduced the amount of carbon stored in the soils of those sites, this  represents  a huge potential carbon sink that could be leveraged in pull greenhouse gasses out of the atmosphere and buy society time while technologies are brought online that eliminate altogether the need to emit carbon.

Increasing inputs is easy. Beyond growing more trees that input sugars and roots into the soil, we can increase soil carbon by increasing inputs from dead wood as well. When a log decomposes, only a portion of the carbon in it is given off as carbon dioxide. Some of that carbon gets drawn down into the soil by microbes like fungi, whose tissues are composed of almost fifty percent dry weight of carbon.

This means that forest managers will need to stop looking at dead wood as waste, and that harvest residues, dead trees and low quality stems may be more valuable as stored carbon than as a traditional lower end wood fibre product.  Organic carbon stored in soils has the added benefit of improving soil ecosystem health and biodiversity, enhancing site productivity as expressed in wood increment. 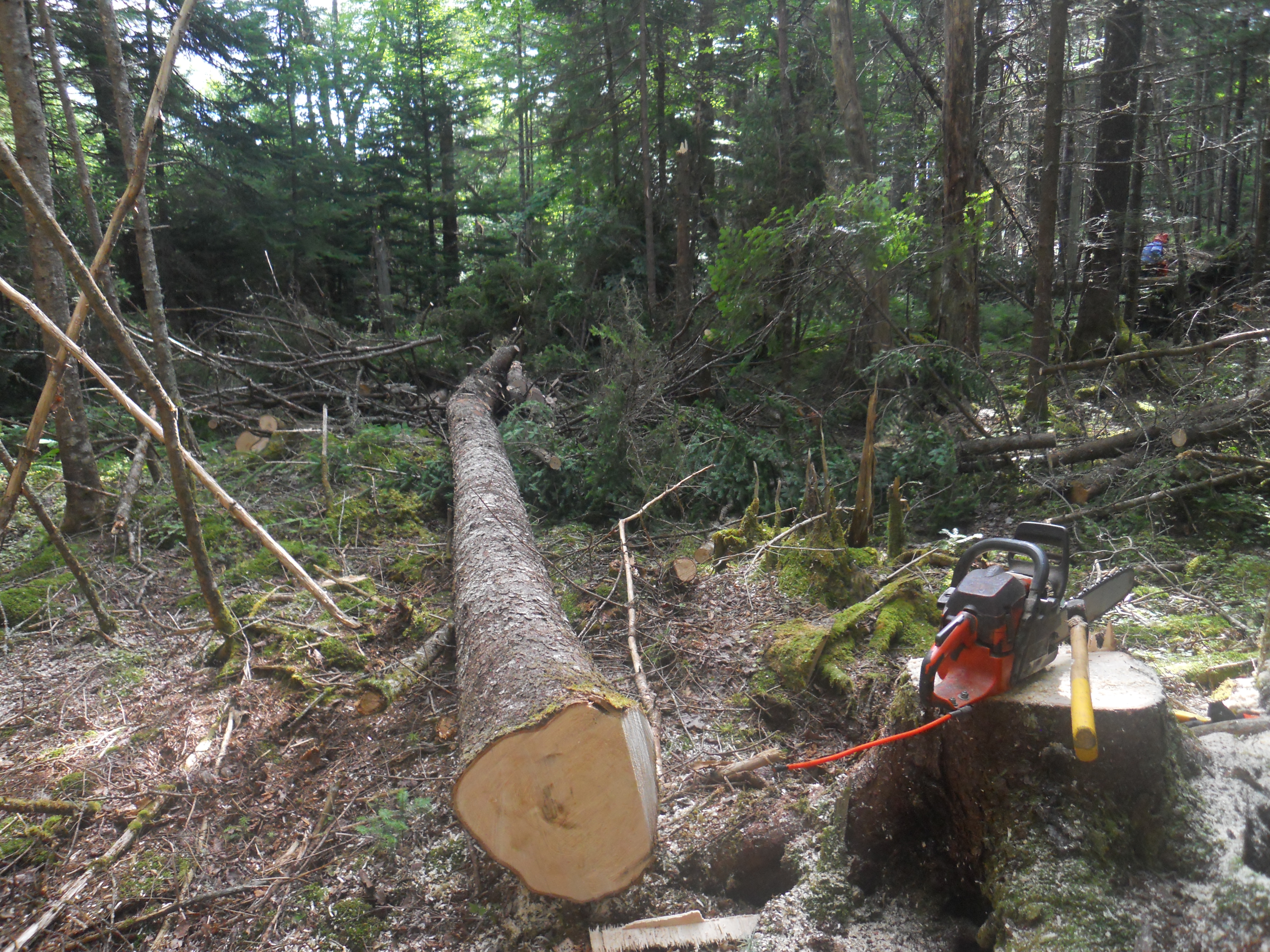 Silvicultural interventions that avoid large openings in the canopy and that do not expose too much of the mineral soil will be best to maintain and rebuild depleted soil carbon levels. Photo Credit Dale Prest

Limiting outputs is straightforward, but does require modification of predominant harvesting practices.

First and foremost managers should aim to avoid large scale disturbance of the mineral soil. Timing of operations and using proper equipment to limit scarification is important for maintaining carbon in soils.

Perhaps most importantly, we should aim to maintain a cool and moist environment at the forest floor. Studies of other soil nutrient dynamics suggest that if you keep canopy openings below 10m in diameter, soil nutrient cycling doesn’t much change.  Likewise, maintaining at least 70% canopy closure in thinnings or multi-stage shelterwoods ought to do the same, and make sure established regeneration covers the forest floor before you do that final removal.

In other words, by avoiding exposing the ground to too much sunlight at any one time we can at least maintain the amount of carbon in our soils. 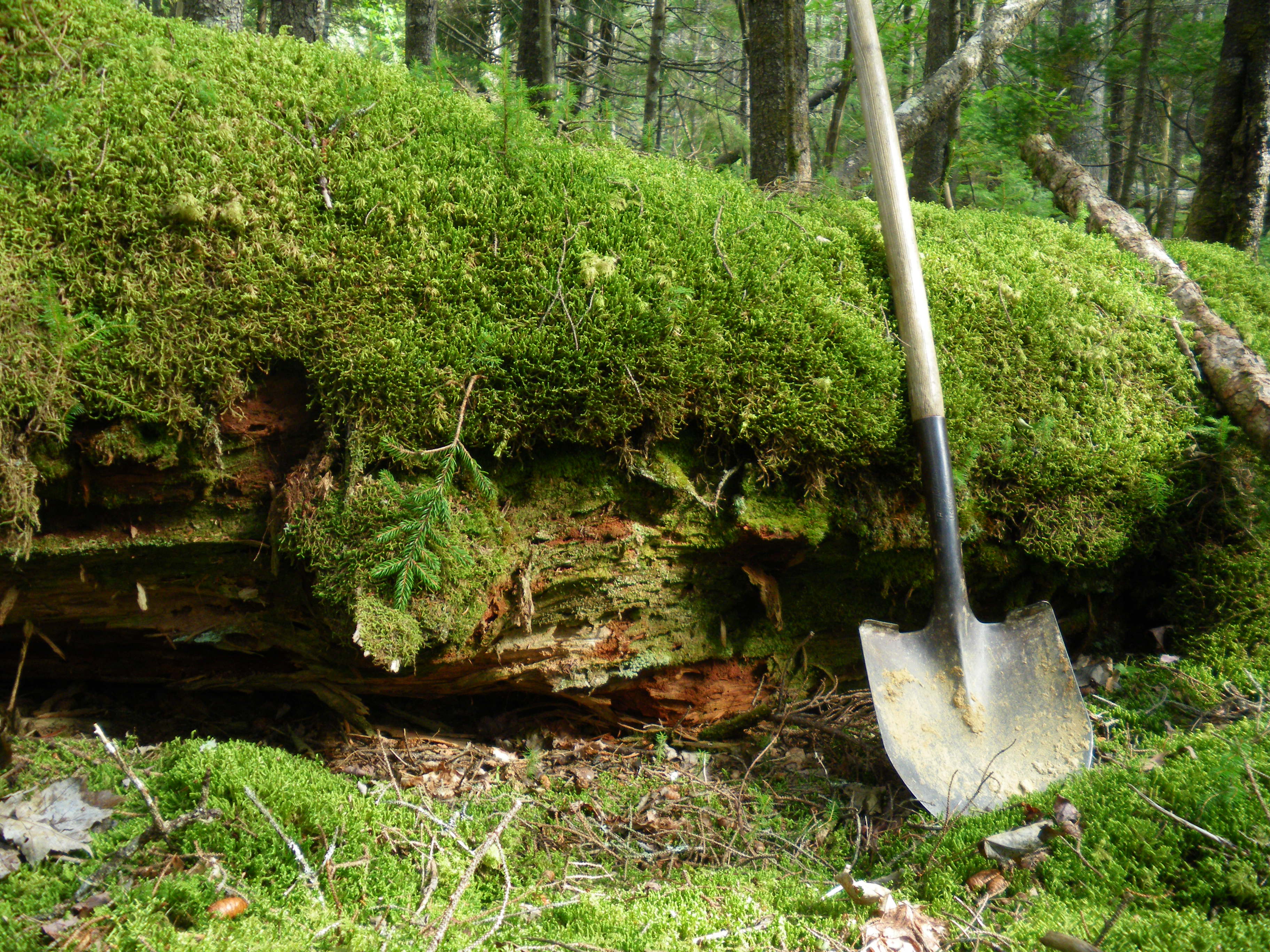 Of course, this soil carbon-building strategy is not appropriate for all forest types.  Increasing dead wood is better known as a fire risk in many forests. Likewise, maintaining a cool and moist forest floor environment is simply not possible in dry forests.  Managers will be required to customize practices within particular regions to achieve soil carbon stock increases.

What’s important is that by incorporating soil carbon into forest carbon management, we can manage forests in such a way that produces timber, creates jobs, maintains canopy cover, values dead wood, and provides wildlife habitat all at the same time.  Forest biodiversity and health are improved, a very important consideration as forests are subjected to ever-greater stresses of a changing climate. Conservationists and industrialists ought to recognise that this approach offers the best of both worlds, and represents a position that reasonable people on both sides of the debate can get behind.

Dale Prest is the Ecosystem Service Specialist at Community Forests International- an environmental start-up that is working to change how societies interact with their supporting ecosystems. Their projects include developing resilient, grid-less electricity systems in Pemba, Tanzania and incorporating the value of carbon storage into forestry practices in Canada.