On May 23, 2013 I attended the Alberta Biochar Initiative (ABI) Ribbon Cutting and Biochar Seminar at Alberta Innovates-Technology Futures (AITF) in Vegreville, Alberta.

This event was a celebration of the establishment of the ABI in order to “expand opportunities for biochar deployment in Alberta’s developing bioeconomy”, and a follow-up on the previous stakeholders workshop that was led by AITF in October 2011.

A highlight was having ABI showcase their two mobile “demonstration scale” biochar units (photographed).The event attracted over ninety participants and featured many incredible speakers, including Dr. Julie Major, a member of the recently inaugurated Canadian Biochar Consortium.  Dr. Major is one of the foremost Biochar experts in North America, and gave the keynote presentation during the event.  The seminar also included presentations by experts and industrial proponents of biochar and a panel discussion that included representatives from major industries, universities, colleges and policy experts exploring the fast changing terrain of biochar development in Alberta and around the world. 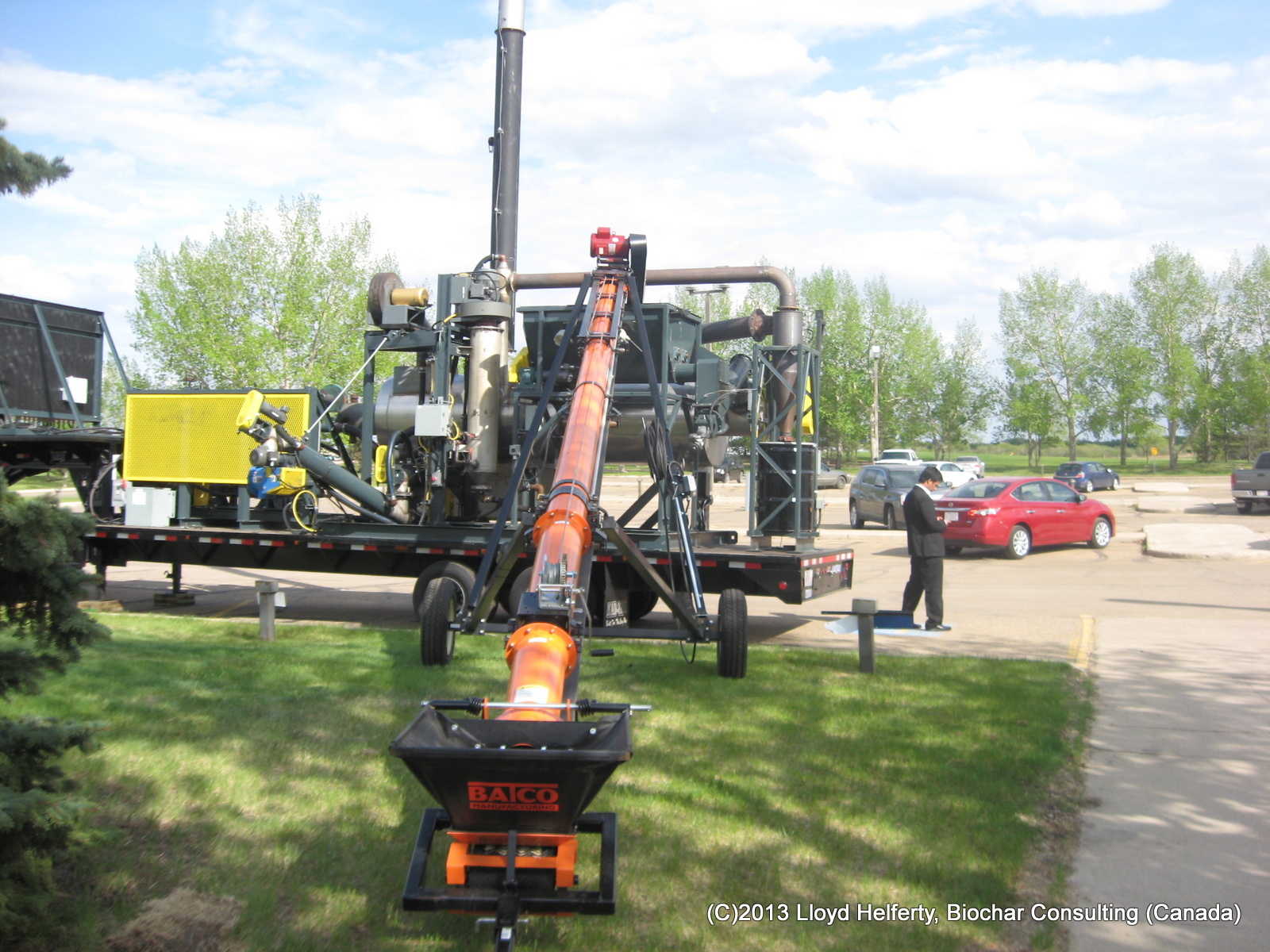 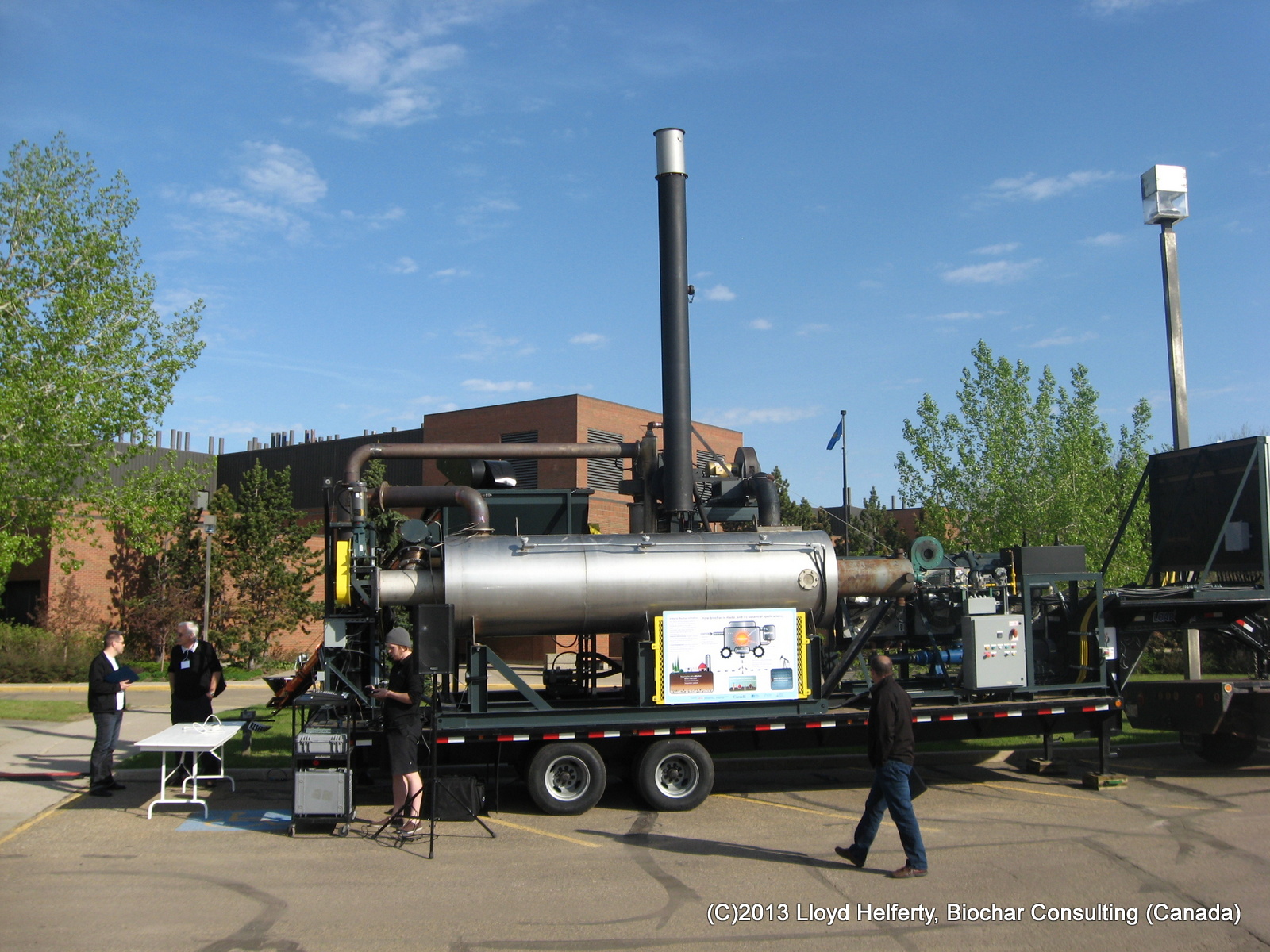 Interestingly, even though this event was held in Alberta, and there were representatives from big industry, including a great presentation from the Technical Director of the Alberta Newsprint Company, much of the focus continued to be on local, small scale Biochar. The emphasis was on considering how biochar ventures could be beneficial to communities across Canada, many of whom are considering making investments in technologies that would increase local bioenergy production and enhance food security.

One gentleman I talked to from a small Custom Sawmill who had come to the event from British Columbia was intrigued by the variety of uses for biochar, and likely walked away from the event with a much greater awareness of how he might utilize his sawmill residuals to create a number of ‘value added’ products and help improve the income from his operations.

The event successfully attracted many locals – including the Mayor of the Town of Vegreville – along with researchers from the University of Alberta, University of Calgary, Langara College and Olds College as well as the Branch Head of Alberta Agriculture and Rural Development, FP Innovations and Alberta Environment, as well as some national and international participants, including Commissioner of the Netherlands Trade office and the Managing Director of Black is Green Pty. Ltd., also known as “BIG Char”, who came all the way from Australia.  The BIG Char system is one of the two technologies that were selected by Alberta Innovates Technology Futures to undertake their preliminary investigations of biochar in Alberta – the other being a fully automated system built by Abri Tech Inc. of Quebec.  Both systems are “portable” and mounted on a trailer that can be moved around from site to site (feedstock to feedstock).

The presence of the local Aquaponics Society was indicative of the diverse audience that was attracted by the topic of biochar. The multiple synergistic uses of biochar in food production industries, on farms and in forests tends to cut across disciplines much more than many other technologies that might be considered “bioenergy”. But of course, pyrolysis and biochar should more appropriately be considered “environmental technology” that can produce multiple benefits; energy, improved soil properties (fertility) and carbon sequestration for mitigation of climate change.

Natural Resources Canada’s Canadian Wood Fibre Centre (CWFC), which is part of the Canadian Forest Service (CFS) were also in attendance along with two CFS representatives and the CEO and Director of Forest Technology at Alberta Innovates Bio Solutions (AIBS) as well as the past President of the Woodlot Association of Alberta.  The forest sector is a major stakeholder in biochar development from the perspective of fibre management, and bioremediation.

Overall it was an excellent event and should help to advance efforts for appropriate utilization of forest residuals for biochar production and create opportunity and benefits for the forest sector overall. As Richard Wayken the AITF General Manager or Bio & Industrial Technologies said prior to the event, “Alberta’s rural-based, small- and medium-sized companies will be able to deploy this green, clean technology to unleash the value in agricultural and forest residues which were once considered waste, and make the most of Alberta’s fibre resources.”

Lloyd is an engineering technologist with more than 10 years experience providing project & system support for engineering projects and activities related RD&D. He is a subject matter expert in Biochar & founding member of the Canadian Biochar Initiative, President of Biochar Ontario, an Advisory Committee Member of the International Biochar Initiative (IBI) and runs his own private consultancy business called  Biochar Consulting (http://www.biochar-consulting.ca/)